With his multilayered work, the German artist Thomas Zipp (born in 1966 in Heppenheim) can be classified among the most prominent representatives of narrative installation within contemporary art. The forefront of his interests includes research in the area of the subconscious, as well as psychological and psychopathological topics such as hysteria, schizophrenia, and the expansion of consciousness. Zipp works with various media, including collages and assemblages; he is also active as a painter, drawer, photographer, musician, and, primarily, as an author of large installations in which he focuses on the overall effect of all instruments and objects used in the given space. Performances play an important role in his work. They are often performed by amateurs or students provided only with brief information about the possible course of events by the artist. In reality, everything depends on the decisions and spontaneous activities of the participants themselves, determining which direction and outcomes ultimately arise from the performance. Thomas Zipp has been labeled as the “psychonaut of art” – an author who works with the uncertain terrain of human subconscious, with a specialized interest in areas that are commonly labeled as psychosis. To the same extent, his work touches upon aspects of philosophy, drug effects, religion and psychoanalysis.

Thomas Zipp has gained attention in the last several years with several large projects. In 2010, he transformed the extensive space of the museum Fridericianum in Kassel into a fictive psychiatric clinic. Visitors were able to move within the installation between the reception area, library, cafeteria, bathrooms and toilets, including the patients’ bedrooms, and experience, at least fictively, the feeling of an inmate in a closed institution for the mentally ill. Of course, there was also a cell for ravers and beds with handcuffs – references to the boundaries between being normal and so-called insane. Zipp focused here on the mechanisms of control over an individual and their abuse at the hands of social and political apparatuses. In Germany this also indirectly references acts of euthanasia performed by the Nazis during WWII.

Thomas Zipp’s next step in this direction took place with the exhibition “The World`s Most Complete Congress of Ritalin Treatments“, which took place in 2012 in Innsbruck, Austria. While in Kassel, the visitors were able to move freely through the whole fictive clinic, whereas in Innsbruck, Zipp created a sort of functional laboratory for researching the processes taking place in the human subconscious. This latter installation was made up of furniture, chairs, various objects, a harmonium, microphones, and buckets with mud, creating a place for performances executed by students from local schools. Dressed in overalls and wearing white masks on their faces, these actors were performing a mysterious activity, similar to mystical theatre. The overalls and masks protected the anonymity of the participants of these experiments and enabled them to release their own feelings and thoughts all the way to the boundary, eliminating rational control.

At this year’s Venice Biennale, at the invitation of the Arthena Foundation, Thomas Zipp put together a complex installation in which he summarized and further developed the results of his researches from his previous projects in Kassel and Innsbruck. In seven rooms equating a typical Viennese palace at Campo Manin, Zipp installed a combination of a psychiatric clinic and a scientific laboratory engaged in the study of magnetic currents in the human brain. The object of these demonstrations became the so-called Koren helmets named after the American scientist Stanley Koren. Visitors accepting the invitation to sit in the prepared medical chair with the helmets on their heads were able to participate in the experiment and, at the same time, let certain parts of their brains be stimulated by electromagnetic waves. The result of the procedure was exceptional, including elevating feelings but also “nightmares”.

The installation “Task Dependence of the Effect of Standards on the Perception of a Series of Objects” in the SVIT relates to several different topics. In the forefront, stands Zipp’s interest in research in the area of psychophysics, specifically in the relationship of man to plants. The question is to what extent is it possible to “transfer” human feelings and perceptions to plants, creating a symbiosis with man that is, just like the relationship between man and animals, an inseparable part of life. A video with pigs feeding on biological waste refers to the cycle of exchange in organic elements. The central area of the installation is devoted to the research of various psychological states such as fatigue, fear, melancholy, and their relationships to the origin of emotions and possible psychological disorders. In SVIT, Zipp creates a research laboratory linking temporary projects with artificial plants and musical performances. The photo-collages exhibited originated on the basis of the performance done on November 27, 2013 with students from local art schools. 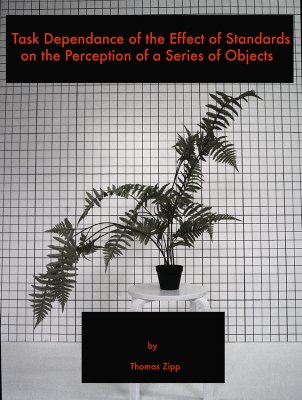 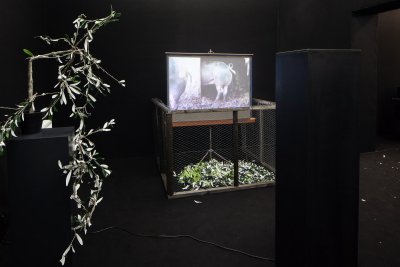 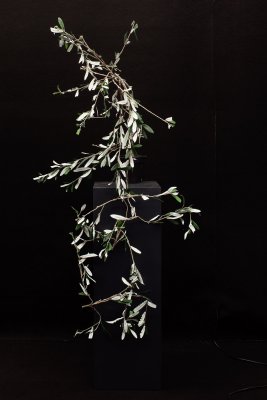 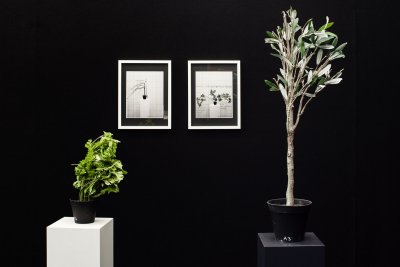 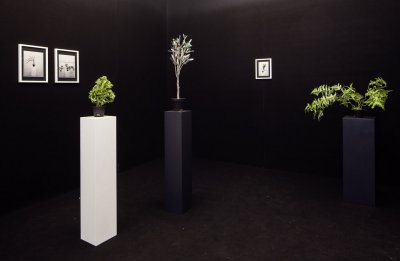 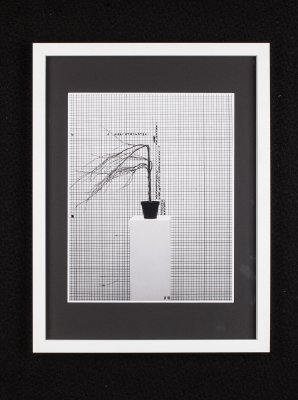 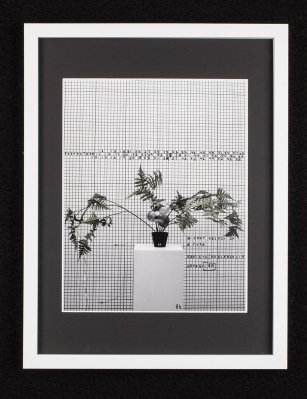 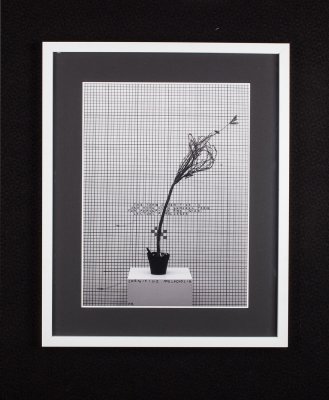 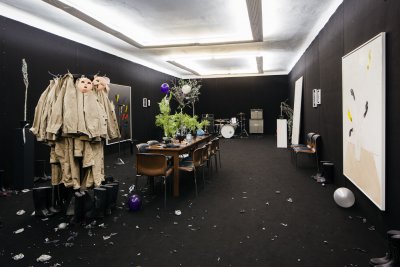 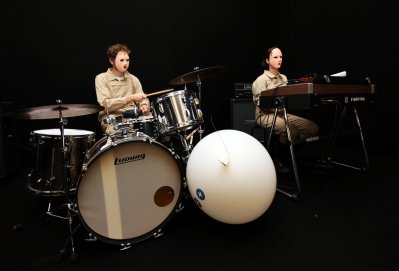 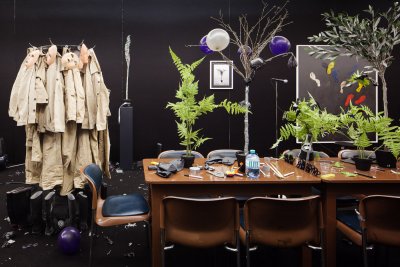 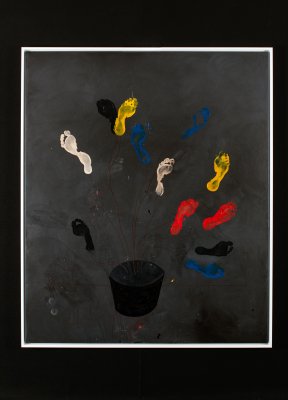 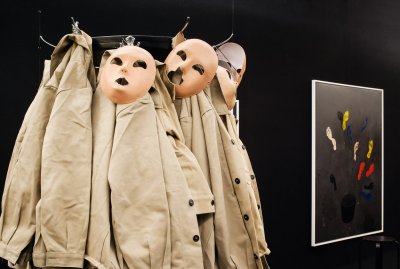 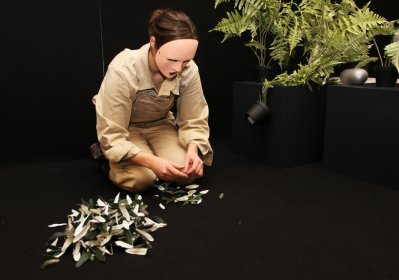 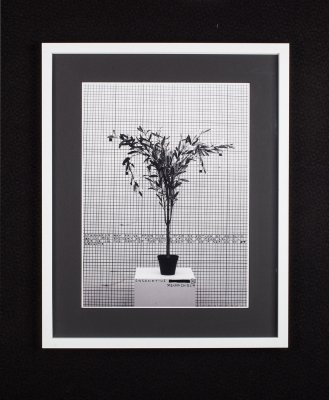 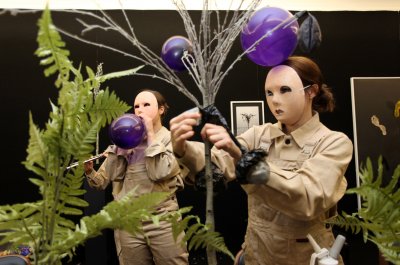 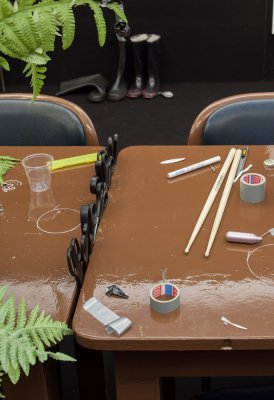 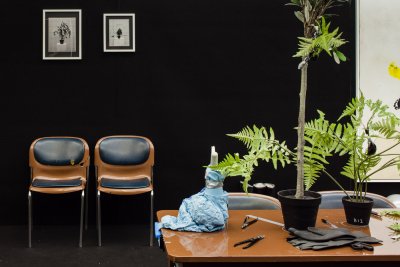 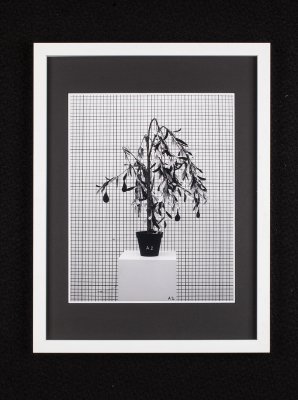 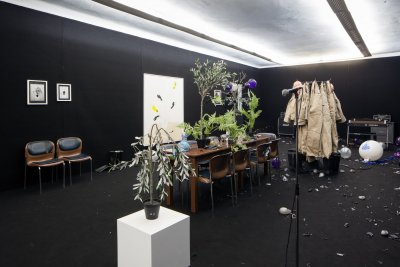 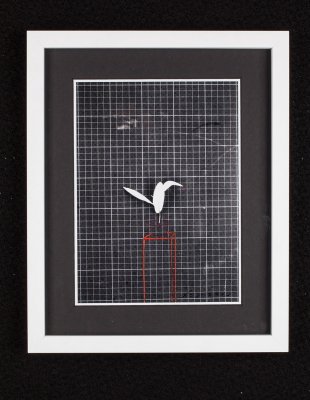 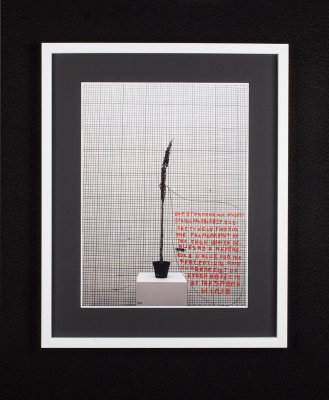 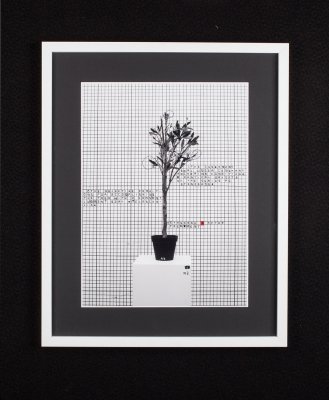 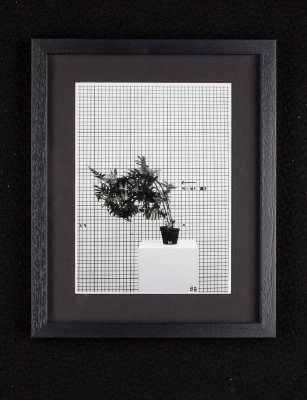