The aim of this Rafani publication is to acquaint readers with the way of thinking, the content orientation or formal processes of this group of artists.

The choice of presented projects is geared toward themes that are probed from different angles in the group’s work, themes that repeat and intersect: starting with the emphasis on the specifics of group identity, to a reflection upon civic attitudes of individuals, an examination of the intensity and character of the role of the state and the power of institutions, to the theme of social or ethnic differences. The latest project was presented as part of the exhibition of Jindřich Chalupecký Award 2006 finalists in Brno where Rafani applied for the first time one of its strategies and did not use a text. Up to this point this had always been an autonomous part of their artistic performances. This monograph also includes an entire stage in the group’s work and opens a new one.

All pictorial and textual materials in the book are the work of Rafani, except for the interview and reprinted facsimiles. The interview was conducted by the editors of this publication separately with the individual group members; the facsimiles were reprinted from various periodicals. The content of the interview and facsimiles has been edited, or reduced as the case may be. The introductory texts and statements for the projects are reprinted without alteration, though the technical descriptions of the installations and actions have been shortened by the editors. The authors of the graphic concept and layout of the publication had the final say in the use of pre-selected pictorial materials. The publication ends with a list of carried out or planned actions and exhibitions, curatorial projects in the CO14 gallery, lectures organized by Rafani at the Philosophy Faculty of Charles University in Prague and biographical details of all who have been members of Rafani during the examined period.

The art group Rafani was founded in the autumn of 2000 with the declared utopian aim “to reach the future with a higher quality of humanity”. In order to achieve this, the group members first defined borders and determined rules, based on which they created a typical collective artistic demonstration emphasised with a logo, uniforms and declamation of manifestos. The deliberate formalization of the demonstration makes it harder to get a clear read on the group’s actions; viewers and critics are therefore often at odds with their interpretations. General themes of nationality, ideology, politics, communications, social stereotypes and social positions converge in Rafani’s work in a visually attractive display. The group doesn’t offer a solution to controversial issues and hidden traumas, but uses stories, mystification, play and shifts in meaning to try to make us less sure of ourselves, to force us to react.
Rafani have been called controversial, aggressive and superficial exhibitionists, but have also earned the reputation as a group „exposing the most sensitive areas of Czech contemporary life and history.“

This book has been sponsored by the Ministry of Culture of the Czech Republic. 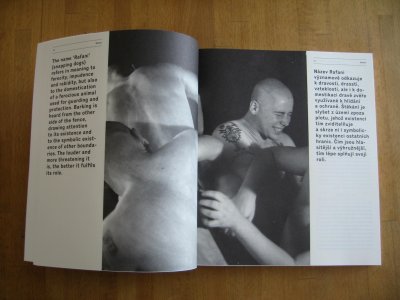