Habima Fuchs – Quality of Being

Those making their way to the temporary site of the SVIT Gallery at Cukrovarnicka 39 to see the works of Habima Fuchs are more likely to find a temple than an exhibition – a place of calm, of reflection, of sensory experience – a place to wander and linger a little longer. The expectation of each visitor, to pass a critical, thoughtful eye over the works is met by the sound of a trickling stream. Singing bowls placed on the ground (Well, Element Water, 2014), serve as a welcome greeting, while the wind of each entering visitor seems to have blown in an array of autumnal foliage. The senses are awakened. Sensitivities are expanded; from the sense of sight, to hearing, touch and smell. Those attentive enough will pick up the scent of herbal tea and incense. The objects themselves resist a reductive objectification to things within a white cube. These spaces induce a living experience of things. They are both findings and expressions, pervaded by the experiences and adventures of a fox, which has been and always will be on the move. Habima Fuchs.

There sits a fox, a Kitsune (jap.), white and sleek – having just jumped onto a bench. “After we thought we’d seen the shadow of a white fox, we followed in the direction he had disappeared and reached a place, empty at first glance. We were excited and caught in a tempest of inner turbulence. We sat and drank tea.” (1)
Formed by the artist from clay and enamelled white, this loner (Kitsune, 2014) resembles the Kitsune statues found at the entrance to shrines for the deity Inari (Goddess of fertility), whose companion is a fox. Kitsunes can represent the goddess herself and, according to Japanese mythology, transform themselves into humans, commonly young, beautiful women. With his mouth and tail – he can have several – he is capable of igniting fire. As a talisman and messenger, this Kitsune – with a friendly and alert look on his face and a bundle of sticks as a bushy tail – carries a roll of paper in his mouth. Upon which five “mindsets” are written, to guide one on the path of enlightenment through interaction with others and one’s self, in recognition of one’s own potential, as the artist says. This path can be taken as a form of pilgrimage, a mental journey.

Next to the fox, a room opens up with windows covered in paper like a Japanese tea house. Here we find a nomad’s camp (Everyday objects of a nomad. Installation), with their tools: a mattress, jacket, tins, keys, water bottles, a bonsai and a laptop. Spirituality and modernity are not mutually exclusive. Digital files are a light load and provide the eternal traveller with a place for personal seclusion and contact to people across the globe, who represent a mental sense of belonging.
This is the artist’s camp, a modern nomad with no fixed address. The things within the exhibition accompany her, she has found and formed them herself – they are at the same time art and life. The secluded shelter has a window, providing a picturesque view of the trees, drawing the eye outside. Lingering a little longer and wandering.
Perhaps the window is open a while and the incoming wind rings the six bells. They hang from the ceiling, between dark, round, elongated ceramics, that act like archaic buildings (Hanging Cities, from an Ancient Civilisation, 2014). Habima Fuchs: “They hang above the earth, perhaps because the earth is no longer inhabitable, or because from here one can develop a new perspective?”. Asian and European bells chime together in the flow of the stream. All continents, we remind ourselves, are joined by water; “forever united as one”. The huts look like wasps’ nests. A homage by the artist to these animals, which, due to their “inadequacies and audaciousness, are not suited to enslaving by humans.”. Bells, wasps and tanzaku, paper strips upon which wishes are written (A little piece to rhythm and amount, Element Air 2014) move through the air. In addition to water, fire and air, there’s also a room open to the element of earth.

In a box here you’ll find moss, spread out like a landscape, wherein two nests are situated (Nests in a Landscape, Element Earth, 2014). On the wall there are two sheets of papyrus, the structure of which invites a meditative observation (Present 1/1, Meditation on papyrus, 2014). Very close to the ground, on boards of wood, as if it has just crawled up there, the ceramic figure of a four-headed snake turns its body to the window. It carries the name, Pratyupanna, meaning “Multiplication in the present” (2014). Similar to a plant, whose own mother creates new mother plants, this snake multiplies itself into new snakes, which are all simultaneously “born” and “give birth”: the multiplication of the present. One body splits itself into seven bodies, which then quadruple and whose 28 bodies then triple, so that a total of 84 bodies are created. This diversification is reunified in the next room with bands spanned from wall to wall, until the 84 pieces of string finally flow into one.

The visitor’s journey comes to a temporary end here. They have opened their mind and senses, now they find themselves in a room of concentration, a space for meditation perhaps, which guides them to inner contemplation, leads them to themselves. From singularity to multiplicity to singularity. Five ceramic figures, decoratively enveloped in colourful, folded cloths, stand, kneel, sit and lie. With their relaxed faces, almond-shaped eyes and balanced poses, they resemble Buddhisattva figures. In fact there are seven of them. The sixth remains out of sight as an undefined possibility for expansion and the seventh can be found in peace outside the exhibition as the forebear of this family. Habima Fuchs names the figures “The Futurologists” (2014), because they are researching the potential of a possible future. We think back to the five mindsets, which the fox brought us during our journey: Light, love, goodness, presence, attention. Our eye turns to a fire. Are those not the footprints of the fox in the sand…?

Habima Fuchs was born in Ostrov, Czechoslovakia in 1977. She lived for a long time in Berlin, before deciding to take up a nomadic life. Habima Fuchs produces ceramics, sculptures and installations, she draws, paints and tailors. The language of forms and visual vocabulary of Habima Fuchs are defined by the intensive analysis of various cultures and religions. Their interrelations become clear in the work of Habima Fuchs, through her engagement with archetypes and universal principles. Spiritual worlds of imagination are united through her work to create a cosmos, which is pervaded by her own experience, awareness and lifestyle.

(1) From the correspondence between H.F. and a friend 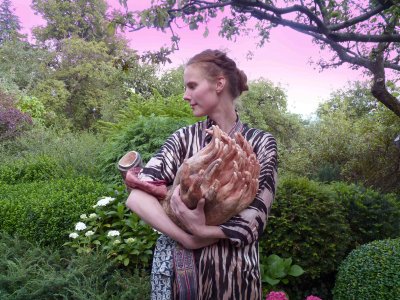 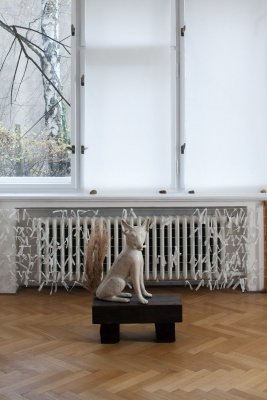 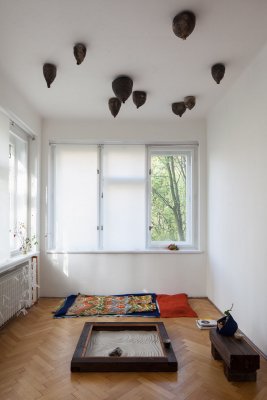 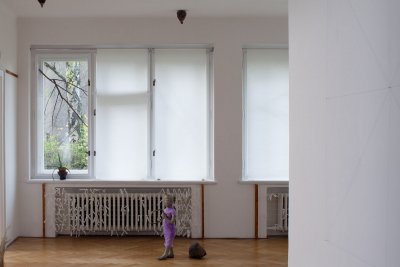 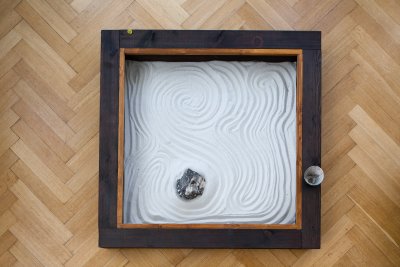 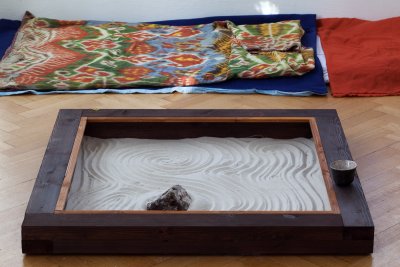 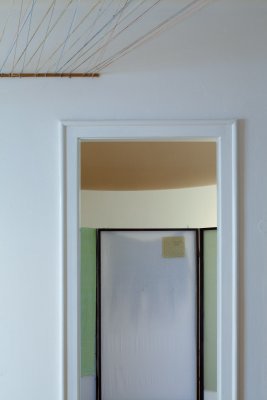 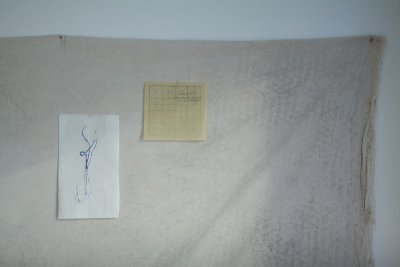 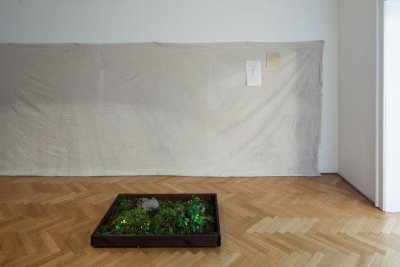 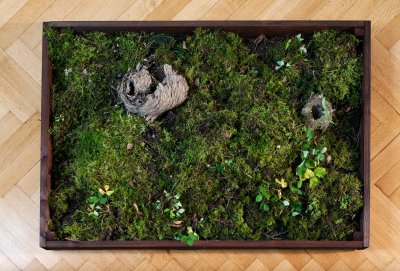 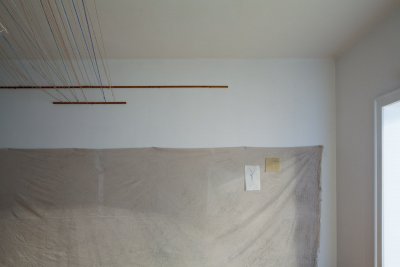 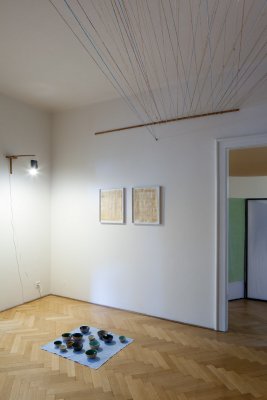 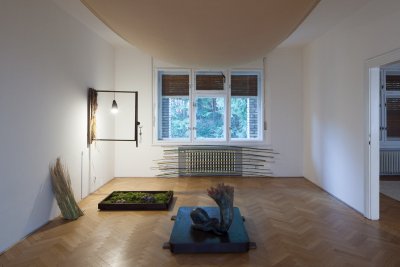 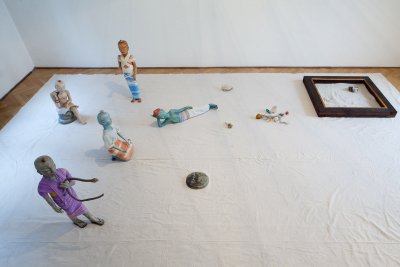 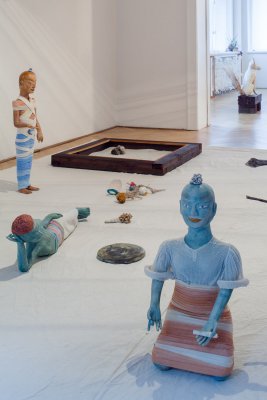 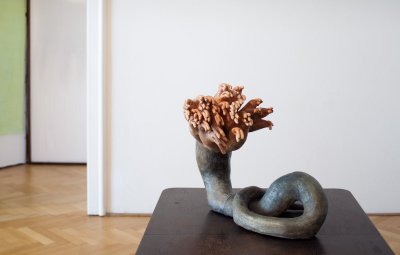 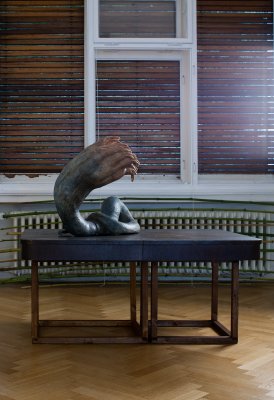 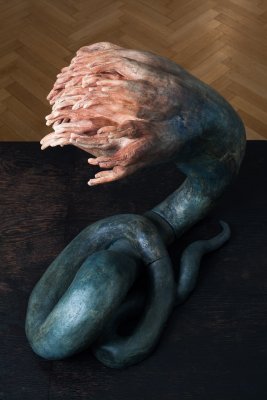 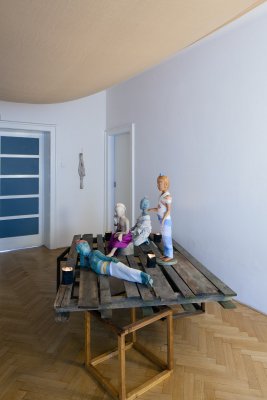 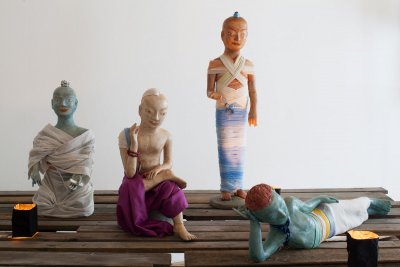 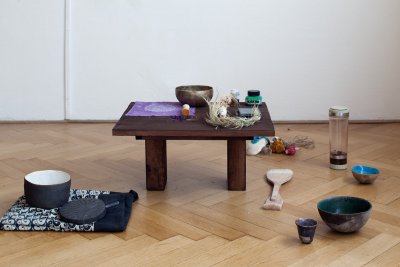 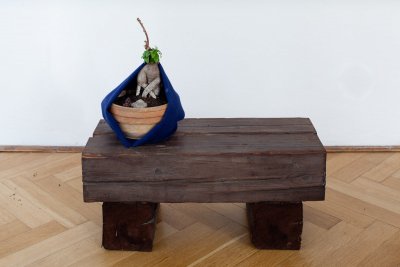 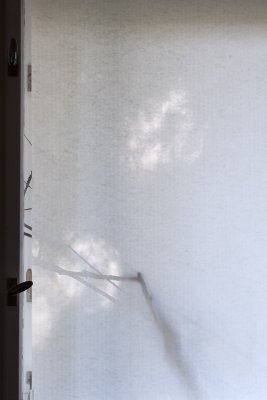